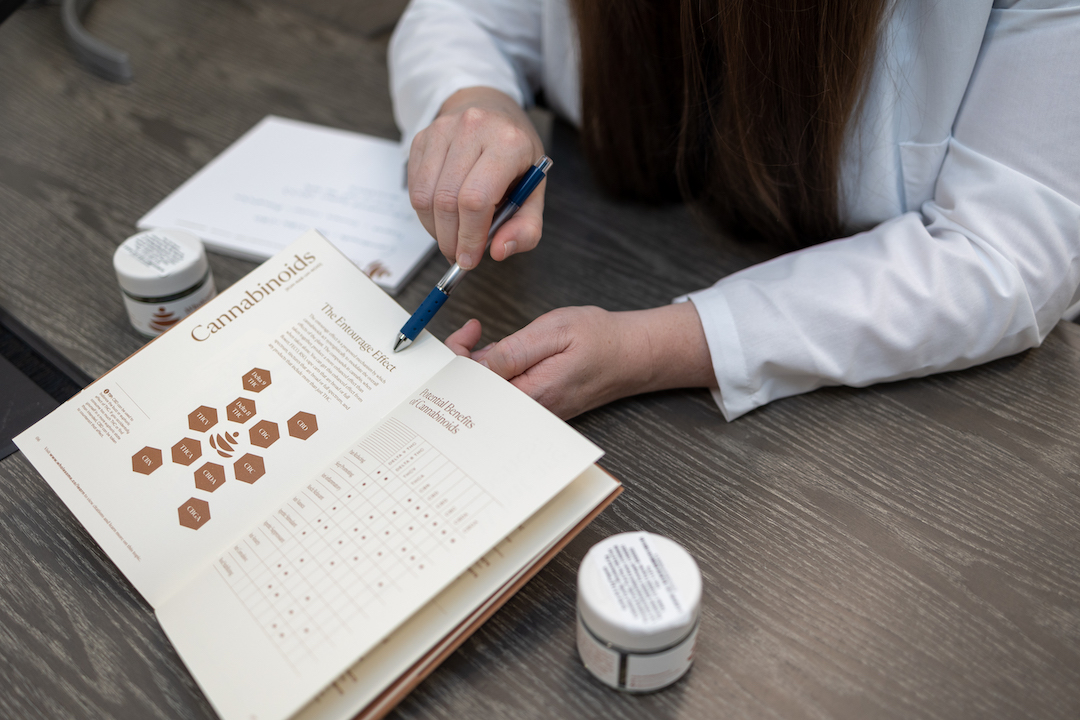 We all know about the cannabinoids THC and CBD, but did you know that there are also about 100 other cannabinoids that have benefits for human health as well? In this article, we will learn about just a few of them that are currently being studied. Read on to learn more.

Cannabinoids occur naturally in cannabis. Of the over 450 different phytonutrients found in each plant, about 100 of them can be categorized as cannabinoids.

As we shall see, cannabinoids can play a vital role in boosting and strengthening our natural endocannabinoid production and function. This can have profound benefits for the entire body.

The endocannabinoid system is a subtle system within the body whose job is to maintain balance. Some of the specific functions it is responsible for include appetite stimulation, pain perception, blood pressure, nausea perception (as well as vomit responses), cognition, memory, immunity, and energy balance.

The system is made up of endocannabinoids, which are naturally occurring neurotransmitters, as well as cellular receptor sites for endocannabinoids, and certain key enzymes that act as catalyzes for functions within the system. (2)

What do cannabinoids do?

In fact, all the phytonutrients in cannabis, including major cannabinoids like THC and CBD as well as the “minor” ones, work together in what is called the “entourage effect” to provide support for the endocannabinoid system and connected systems within the body.

Each cannabinoid affects receptors in the brain and nervous system a little differently, and this leads to a diversity of benefits for the body. This is also why manufacturers make specific formulations highlighting different cannabinoids for different needs.

What are the different cannabinoids?

Like we mentioned above, there are close to 100 different kinds of beneficial cannabinoids that science has discovered so far. Let’s take a look at some of the most commonly known ones.

CBD, or cannabidiol, is probably the most well-known cannabinoid besides THC (which we will talk about next). It can create a relaxing and even sedative effect but is not considered psychoactive. CBD’s benefits appear to be enhanced with ongoing use. Three common conditions that millions of people use CBD for are sleep, pain, and stress. (3)

CBD use has also been linked to lower inflammation levels and it may even slow the growth of cancer tumors. (4)

CBD can come in a wide variety of products including tinctures, capsules, gelatinous cubes, and even vapes. At WholesomeCo, we have a number of popular products that highlight the benefits of CBD. Some of them, such as Hygge Sour Apple Gummies are CBD and only contain less than 1mg of THC. Others, such as Dragonfly Bites 1:1 Apple Cinnamon, Hygge 1:1 Raspberry Gummies, Jilu 1:1 Super Lemon Haze Cart, and Zion 1:1 tincture allow the medical cannabis patient to benefit from higher doses of both CBD and THC.

THC, or tetrahydrocannabinol, is a cannabinoid that most people are familiar with. It is the main psychoactive cannabinoid and the cannabinoid that is found in abundance in cannabis. It has many benefits, including help for reducing pain, promoting appetite, and helping with seizure conditions such as epilepsy.

THC can be very effective for chemotherapy-induced nausea. In fact, one study published in the British Medical Journal found that THC was more effective at curbing chemo-induced nausea than over half a dozen of the most common anti-nausea medications. (5)

Consuming too much THC can come with some pretty uncomfortable side effects, especially for seniors or those who are sensitive to THC. Be sure to consult with your Wholesome cannabis professional if you are just starting out and want to try THC in some form, especially if you are taking prescription drugs as well.

THC can come in a variety of different forms too, including vape, tincture, flower, and more. Be sure to check out the online WholesomeCo product menu for more information.

CBN stands for cannabinol. It develops naturally as THC loses its intoxicating effects and begins to oxidize. This usually happens as a cannabis plant ages. CBN can produce a mildly intoxicating effect in large doses. It is thought to be about 25% as psychoactive as THC.

There are not that many studies that look at CBN directly, however, some have shown that it can be a good sleep aid and may provide assistance to those with insomnia. Rat studies have shown that it can also provide relief for muscle and joint pain. Finally, a 2005 investigation conducted at the University of Washington found that small amounts of CBN given over a 12-week period helped delay the onset of ALS, or Amyotrophic Lateral Sclerosis. (6)

CBN is not as readily available as CBD, but it can be found in oil, tincture, capsule, vape cart, tea, and isolate forms.

CBC, or cannabichromene, is one of the six most researched cannabinoids. It originates in much the same way as CBD does from CBDA (see below). The only difference is that CBC forms from a cannabinoid called CBGA when exposed to heat. CBC does not usually bind with CB1 receptors like THC does. It does bind with other receptors, such as those associated with pain perception.

CBC does not produce an intoxicating effect, but does come with some hefty benefits, according to research. CBCs known benefits are its ability to lift the mood, lower inflammation, and regulate stem cell function. A lot of its benefits have to do with how it boosts natural endocannabinoid production, especially anandamide. CBC can be found in oils, in edible CBD products, as well as in topicals because of its benefits for the skin and skin conditions. (7)

CBG, or cannabigerol, has been the focus of several research studies as of late, especially for what it may do to help those with cancer. A 2014 in vivo study at the Universidad Del Rosario in Bogota, Columbia found that CBG was able to block receptors that caused colon cancer cells to grow. (8)

Some research has also found that it may have significant antibacterial properties. A 2020 investigational report published in the journal ACS Infectious Diseases found that CBG was able to fight against strains of Staphylococcus aureus (i.e. MRSA) that were methicillin-resistant. (9)

Cannabigerol is produced in significantly smaller quantities in the cannabis plant than other cannabinoids. That means that products that contain it are rare but producers in Utah are starting to make more of these products available. WholesomeCo offers some products that are specifically designed to help with serious conditions such as cancer symptoms. One example is Blended FECO, which is a 1:1:1 THC/CBD/CBG tincture by Jilu. Another is Boojum Hibiscus lime 1:1 gummies.

Similar to the relationship between CBDA and CBD, THCA is the “parent cannabinoid” of THC and is found in large quantities in raw cannabis plant.

THCA is known as a strong neuroprotectant, with benefits for those who suffer from Alzheimer’s and Parkinson’s disease. Studies have also linked it to help with certain forms of cancer. A 2013 joint Italy-UK investigation discovered that THCA from raw cannabis instigated prostate cancer apoptosis. (10)

THCA can also be beneficial for wasting diseases such as cachexia and anorexia nervosa. It can significantly reduce inflammation and therefore is a go-to for many people who suffer from arthritis, seizures, and multiple sclerosis. Most people achieve the benefits of THCA via juicing whole cannabis plant.

THCP is short for tetrahydrocannabinol. It is an “analog” of THC that was discovered by accident by scientists in Italy in 2019.

Like THC, it is psychoactive. What is really interesting about THCP is that it is actually 33 times more psychoactive than regular THC. This means that it can cause a more intense and intoxicating high. (11)

THCP is derived from hemp in a manner similar to Delta-8 THC. Because of this, it is currently legal in most states. It is a psychoactive substance, however. That also makes it controversial.

The benefits of THCP are basically the same as with THC, albeit more intense. Likewise, the side effects, including dry mouth, heart palpitations, and paranoia, may be more intense for some individuals as well.

CBDA is the raw form, or “parent cannabinoid,” of CBD. When CBDA in raw cannabis plant is heated, CBD is formed. CBDA has been the focus of many studies for what it can do to lower inflammation. It also has the ability to affect pain via the regulation of serotonin levels. (12)

Some studies have found that CBDA may even be able to lower depression and help with nausea faster and in smaller amounts that regular CBD. (13) An exciting 2021 study also found that CBDA may help mitigate and prevent infection from some forms of COVID/SARS virus. (14)

CBDA is mostly found in tincture or oil form and has little or no side effects, according to some studies.

Cannabinoids are just one part of the healing equation

When it comes to the healing benefits of medical cannabis, cannabinoids such as the ones mentioned above are a big part of the equation. That being said, they are just one part. Other factors to consider when looking for the best cannabis products for you include terpenes (and other phytonutrient content), strains, and consumption methods, as well as the particular brands you are considering. Of course, the most important part is your unique body and health needs!

If you are just starting out on your medical cannabis journey (or even if you are not) and you have questions about what cannabinoid types and specific products may help you, the WholesomeCo team of pharmacists are here to help.

Our pharmacists are Doctorate-level professionals who have been trained in both pharmaceutical drugs and cannabis therapy. They can steer you in the right direction and answer your questions about qualifying conditions, specific cannabinoids, and even potential drug interactions. Be sure to contact a Wholesome Pharmacist today for your free consultation.