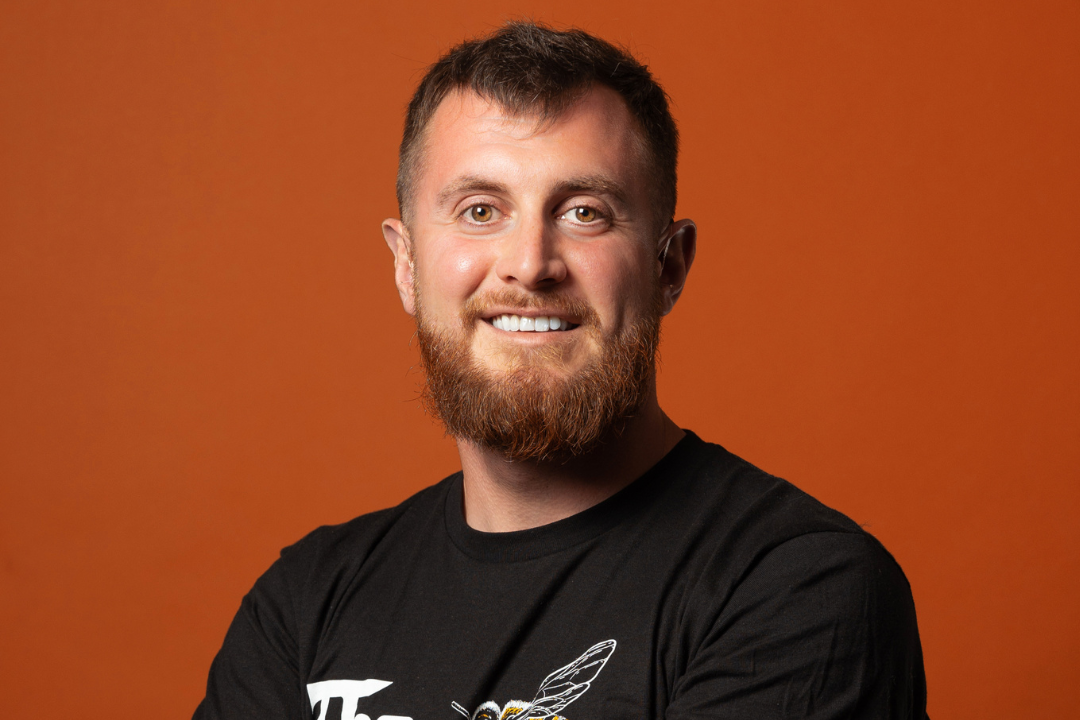 Dylan Roe’s engaging persona can somehow make anybody interested in marine infantry, cannabis, and beekeeping all in the same conversation. Although many today would describe him as a bright and cheerful soul, there was a time when his life seemed the exact opposite.

Dylan’s passion for life was buried by the heartbreaking side effects of opioids and benzos after serving as an infantry marine put a lot of stress on his body. Dylan was awarded a purple heart for his sacrifices and honorably discharged from the military. Following his retirement, Dylan’s perspective of pain management and well-being grew as he was able to experiment with alternative healing methods.

Dylan’s energy is one of a kind, and his willingness to talk about the things he is passionate about makes him the perfect advocate for health, happiness, environmentalism, and most importantly, medical cannabis.

At age 19, Dylan joined the military with a dream of working alongside one of the strongest fighting forces in the world, the United States Marines. For the next eight years, Dylan served as an Infantry Marine, putting his physical and mental capabilities to the test. The traumatic events and sights he witnessed during this time would stain his memory for a lifetime.

On May 29th, 2012, Dylan was stationed in Sangin Afghanistan as their country attempted to gain freedom. They turned down an alleyway where they encountered loose power lines that prevented their military vehicle from passing.

As Dylan proceeded to address the issue, an 80lb IED exploded directly in front of him. IEDs are destructive bombs commonly used by terrorists to kill enemies but miraculously, Dylan survived the attack. He earned a purple heart for his sacrifices and the wounds he suffered on this day, both physical and mental.

The impact of the explosion resulted in a traumatic brain injury and on top of 8 years of intense work, Dylan’s body could not sustain much more. He realized the physically demanding aspects of day-to-day infantry life were finally taking a toll on his body and well-being.

After returning home, Dylan found an opportunity to work at an infantry reserve unit in Utah. He and his wife found Utah the ideal location to plant their roots and raise a family. It also served as the perfect place for Dylan to begin addressing the injuries his body had endured over years of intense physical excursion. After several knee and shoulder surgeries, he was forced to fight a new battle, recovering with pain pills.

In 2016, Dylan began attending pain clinics where he was prescribed a variety of medications to help treat his severe pain and PTSD symptoms. He began the process with an open mind but eventually experienced his body, mind, and soul begin to deteriorate. He remembers feeling inhuman, struggling to perform basic tasks necessary to survive. “It really changed everything about me,” Dylan says. “I had no soul. I didn't feel connected to anybody. I felt like I didn't exist.”

Under military insurance, his treatment included using a series of trial-and-error drugs that never seemed to be enough for his body. “It felt like I had gotten used to everything relatively easy,” he says. “I remember when they prescribed me morphine, it felt like it burned right through me.” A summary of his prescriptions throughout his recovery included various types of opioids, fentanyl patches, antidepressants, and Benzodiazepines (benzos).

One medication led to another and eventually, the repercussions left Dylan unable to care for himself or remember certain time periods of his own life. He relied heavily on his wife’s support, even as it became extremely hard for him to engage in healthy relationships. The thought of not being able to hold a conversation with his daughter, let alone care for her, was agonizing. Attempting to relieve pain and PTSD had escalated to fighting each day to survive.

Dylan realized that something needed to change. He could not continue falling asleep each night wondering if he would wake up the next morning. His next chapter of life would not be easy, but the outcome would be well worth his efforts.

Dylan never liked the feeling of pills; he was just willing to do whatever it took to not suffer excruciating pain each day. He assumed that following orders given by highly educated professionals was the best way to care for himself. Little did he know, it was becoming an advocate for nontraditional healing methods that would save his life.

After a four-month withdrawal nightmare, Dylan began to welcome peace and clarity back into his life by replacing pills with medical cannabis. The fact that cannabis would not kill him made it sound appealing. The pain-relieving, calming benefits were a bonus at this point in his life.

Dylan's mind had been constantly flooded with evil thoughts after experiencing the depths of terrorism and painkillers at a young age. After implementing cannabis into his healthcare routine, he was almost immediately able to see the world in a more positive light. While using cannabis as a tool, Dylan has been able to accept the traumatic events he experienced during his time at war and find comfort within society again.

Cannabis in a learning environment

The revitalizing effects Dylan experienced while medicating sparked an interest in learning and absorbing as much information as he could. He attended school pursuing a degree in psychology with a concentration in mental health studies. He found a love for reading and understanding his own mental health conditions that he was not able to fully process while taking pharmaceutical drugs.

He completed his degree as a distinguished student, graduating with a 4.0 GPA. He decided to not pursue a master's in order to devote his attention to family, placing importance on being a present father.

Upon graduation, Dylan was faced with the lingering question “what’s next”. What was he going to do with the amount of knowledge and motivation he had to make the world a better place? The answer was beekeeping. With support from his wife, they started the company 818 Apiary. Dylan transitioned from fighting with powerful weapons to finding zen working with bees, the most harmful aspect being their tiny stings.

Similar to bees being at the foundation of our ecosystem, mental health lies at the center of our existence as humans. Dylan uses working with honey bees as a time to reflect and become more intact with himself and other living things. He has become extremely passionate about his work as a beekeeper, inspiring and educating others with his expertise.

The more in touch Dylan becomes with himself and the natural world, the more he realizes how out-of-touch healthcare has drifted. “We forgot the human aspect when we hit the opioids,” he says.

Although pharmaceutical pain pills can be successfully used, they can be very destructive when used in a large quantity or over a long period of time. Dylan emphasizes the importance of normalizing cannabis, especially for veterans.

Those who are serving or have served in the military can be left out of cannabis treatment options because of their position in government and cannabis remaining federally illegal. Cannabis resources are important to the community as the medicinal benefits have commonly been used to treat symptoms experienced by war veterans. Dylan’s dedication to raising awareness as a veteran himself provides an exceptional recourse for others facing similar circumstances. After all, statistics show the legalization of medical cannabis may be linked to fewer opioid deaths.

Another barrier that lies between patients and cannabis is federal regulations prohibiting physicians from recommending cannabis as medicine. This puts doctors in difficult positions and limits what they may share, even during open-minded conversations. Some states are finding ways to break traditional federal barriers by allowing qualified medical providers to recommend cannabis for certain conditions. The Utah cannabis program has adopted these practices by implementing the LMP (limited medical provider) program.

Learn more about the role of an LMP in Utah here.

After learning about cannabis, Dylan was eager to ask somebody with a medical background of their opinion. He was surprised that these highly educated people were taught throughout their entire training that opioids are the answer. He later learned that medical professionals can risk having their licenses revoked if cannabis is recommended. He acknowledges that this is not the physicians’ fault, but it is something that needs to be addressed.

Dylan is on the front lines of cannabis advocacy by trying to destigmatize a plant that has gotten him and other patients so far in their healing journeys. We are overwhelmed with the amount of wisdom and passion he has to offer the Utah cannabis program and are excited to share his story.

For Dylan, cannabis is not a method for getting high, it is medicine. “Smoking weed as a kid was a different experience. Now, I am legitimately treating symptoms,” he says.  “I genuinely believe medical cannabis is the reason I am still alive.”

Being a first-hand witness to the medicinal benefits has allowed Dylan to look past the socially unacceptable aspects. His success enables him to educate others rather than feel ashamed by negative stereotypes.

“I am fighting to make sure cannabis is available because I want more stories like Dylan’s,” says Kylee Shumway, the Director of Medical Development and Advocacy specialist at WholesomeCo. Kylee represents Utah cannabis patients to ensure lawmakers do not rule out such an important healing tool for so many individuals.

It takes extreme effort on both sides of the program, those doing the work at the legislative level and those trying to heal. Cannabis representatives and open-minded citizens are the reason patients like Dylan have success stories to share as educational resources and inspiration to others.