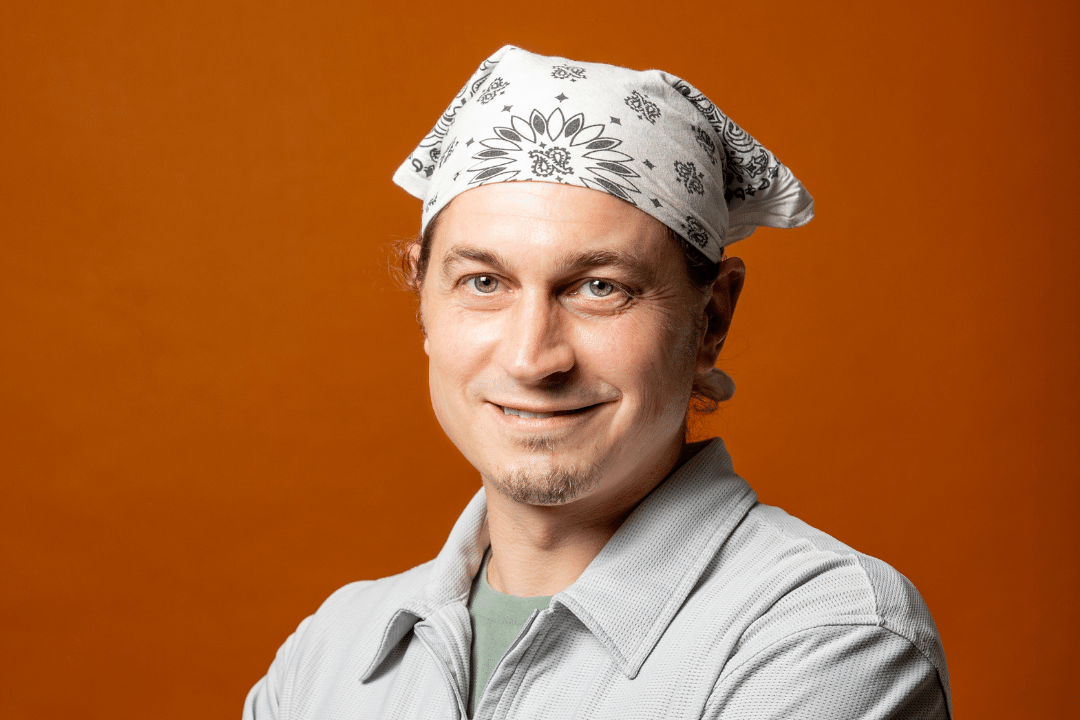 After suffering a severe car accident at age 25, lifelong Utah resident Brandon Voorhees found himself with a traumatic brain injury (TBI) that would alter his life forever. Over the past 17 years, Brandon has experienced how medical cannabis can be used to improve his condition.

At the time of his accident, Brandon was excited to begin the next chapter of his life.

It was June 3rd, 2005, and he had just proposed to his girlfriend. On his way home to celebrate the special occasion, he stopped to pick up milkshakes for his new fiance and her two young children. Possibly due his excitement and increased adrenaline, Brandon forgot to buckle his seatbelt after retrieving his wallet to pay.

Minutes after leaving the drive through line, Brandon was ejected from his Jeep. His vehicle clipped the corner of another, and completely flipped. His loyal passenger, his dog, accompanied him and ran home 28 blocks to find help after surviving the crash. Brandon woke up 3 days later in the University of Utah hospital with 30 staples in his head, 16 titanium screws, and 8 straps holding his skull together.

Hospital staff warned Brandon's new fiance that he would probably not remember her or ever walk again. The injuries he sustained were serious and a full recovery was unlikely. Brandon suffered dual epidural hematoma (bleeding between skull and membrane covering the brain), heavy skull fractures, facial fractures, scapular fractures (shoulder blade), and two vertebral fractures. Additionally, he lost six pints of blood during his eight hours of surgical reconstruction.

Miraculously, Brandon spent only 8 days in the hospital after his accident. “At the time, there were not many resources for those recovering from traumatic brain injuries,” he says. Following his procedures and minimal physical therapy, medical professionals made sure he could walk, and sent him home. Although Brandon was discharged from the hospital, this was just the beginning of his long road to recovery.

Brandon went through nearly 4 years of monthly doctor visits and prescription drug trial and error. He suffered extreme headaches, migraines, and facial pain, as well as the mentally challenging aspects of living with a brain injury. He attempted to treat his symptoms using not only western medicine, but eastern healing remedies such as acupuncture as well. Pharmaceutical drugs he was prescribed included common pain pills and nerve pain management remedies. A list of Brandon's prescriptions over time included:

Brandon realized that he was not properly nourishing himself while using medications to find relief. “So many other facets of life suffer when your body's homeostasis is unbalanced,” he says.

Aside from pain management pills, Brandon tried a treatment method called Gamma Knife to treat trigeminal nerve pain. Gamma Knife is a therapy method that uses radiation to treat brain abnormalities. In Brandon's case, radiation was delivered to his trigeminal nerve, the main nerve that runs from your skull and branches out into the bottom of the face. Some patients refer to the pain stemming from this area as ‘Suicide pain’. “It's one of those that people would rather end their life than deal with the discomfort involved,” Brandon says.

Brandon found that all of the treatment he was recommended may have been somewhat helping him, but it was definitely not healing him.

“I was out of legal options when I switched to cannabis,” Brandon says.  He knew that his condition could potentially improve by using medical cannabis, but the legality in Utah made it extremely hard to find trustworthy resources. He gathered research and information provided by other states and countries to educate himself on the healing properties. Despite the illegal aspects, Brandon needed to do what was best for his body.

He struggled at first to find the right regime with limited professional guidance. “There were no pharmacists or doctors to talk to. It was stuff from the street and the only way to use cannabis was to smoke it,” he says.

Brandon emphasizes the importance of the Utah medical cannabis program today and the information that is available to new patients. He wishes he had the convenience of choosing from different consumption methods in his early stages of medicating.

“Your street dealer doesn't give you the option to choose products with different THC levels and cannabinoid combinations,” he says. “There was also no lab testing, you had to trust who you were getting it from.”

Brandon appreciates the meaningful conversations he is able to have with cannabis pharmacists today, and the opportunity to discuss products that are regulated and safe to consume.

Since embarking on his medical cannabis journey, Brandon has been able to manage his pain in a more specific way without negative repercussions. Although some limitations still exist throughout his daily life, he is able to function normally within society. Brandon enjoys his hands-on job as a small engine technician, being a present parent, and participating in outdoor activities. His positive experience with cannabis has proved it was not necessarily his brain injury debilitating him, it was the medications he was recommended to treat his TBI symptoms.

“There has been a lot of trial and error involved with cannabis, but it doesn't feel anywhere close to when doctors were throwing pills at the wall and seeing what stuck,” he shares. Brandon found journaling to be an important tool while exploring the medical benefits of cannabis. The process helped him become more in tune with his thoughts and bodily sensations, and record what worked well.

Brandon finds additional relief in knowing that cannabis will not lead to harmful and possibly fatal outcomes that he feared while using prescription drugs. “If you use too much cannabis you might go to bed early, drink a full glass of water, and maybe eat some fruit. That's the worst-case scenario,” he says.

Brandon did not grow up in a cannabis-friendly home. “When I was screwing around with cannabis at 16, my parents called the police on me,” he says. Since medicating as an adult, he has changed their minds by proving that cannabis can be a helpful resource.

“My wife thought cannabis was a stupid high school drug, and now she sees the benefits when it is used properly,” he says. The number of individuals who still look at cannabis as just a way to get high is surprising to Brandon. “With all the legislation supporting and legalizing it, there has to be something more,” he says.

Prior to using cannabis, Brandon constantly worried about words and actions that were out of his control due to medication side effects. After experiencing narcoleptic habits and blacking out for hours at a time, he could not be trusted alone with his children.

Therapy was an important resource to help Brandon and his family understand that he was not to blame for his TBI symptoms and medication side effects. “I regret that my children had to learn and go through my head injury with me,” he says.

When he made the switch to cannabis, Brandon felt it was responsible to medicate outside in his secluded camper van. His kids decided to surprise him for his birthday one year and fill his space with decorations. After accidentally finding his cannabis they ran to their mother in tears, worried about his well-being.

Brandon and his wife felt it was necessary to sit down and discuss as a family the reality of using cannabis as medicine. They raised their kids to be a part of a world where cannabis is normalized as a healing medication and not a harmful drug. If more people are educated about the truth and reality of using cannabis in a responsible way, the stigma around it being a debilitating substance disappears. “We would rather be honest and truthful with our kids than feel like we are hiding a ‘dirty little secret’ from one more person,” Brandon says.

Navigating the world with a TBI

Brandon is constantly exploring emotional and physical triggers that come with a TBI and PTSD related to his accident. Using cannabis has increased his self-awareness, allowing him to pinpoint what situations aggravate physical and emotional discomfort.

A few particular feelings he has noted include extreme sensory overload in stimulating environments, discomfort at loud concerts, and sensitivity to emotional movies. He also experiences a tremendous amount of pain during nervous situations that cause clenching of the jaw or gritting teeth. Usually, these reactions occur while driving, which he has resolved by working within walking distance of his home.

Brandon has learned how to limit the activities in his life that trigger unwanted symptoms. He has implemented changes to better his health such as resting, reenergizing, and eating regular nutritious meals to fuel his brain.

Cannabis has given Brandon the opportunity to be reconnected with his body and live life to the fullest despite his brain injury. His passion for natural healing has inspired him to begin cannabis coaching for beginners and those interested in treating medical concerns.

The Utah Medical Cannabis program has given him and many other patients a second chance at a successful, meaningful life. “What is there if you don't have a quality of life?” Brandon emphasizes.