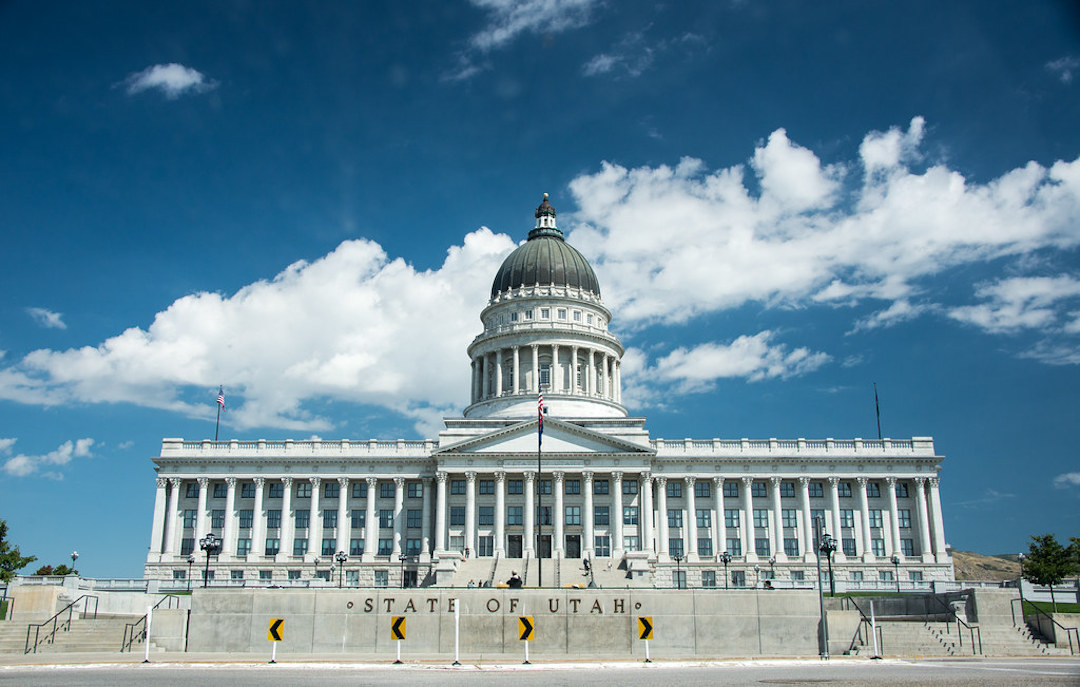 Here in the Beehive state, more than 40,000 people currently carry a medical cannabis card that allows them to legally purchase, possess, and consume cannabis to treat their qualifying condition.

We at WholesomeCo are proud to be able to serve Utah’s medical card-carrying patients. However, at the same time, we are very aware that there are many others who choose to use cannabis without a medical card. Of these, thousands have received misdemeanor possession citations simply for carrying a small amount of cannabis for personal use.

Although we would never condone breaking the law, the sad fact is that a misdemeanor on a person’s record can derail a life. In this article, we will unpack the hows and whys of the current situation in Utah and outline the ways in which ordinary citizens are working for cannabis criminal justice reform in the state and throughout the nation.

Under Utah law, those individuals who do not possess a medical cannabis card who possess any amount of cannabis up to 1 ounce will be charged with a class B misdemeanor. Class B misdemeanors can result in up to 6 months in jail and a $1,000 fine, in addition to other court fees, including the cost of a lawyer (Utah Code § 58-7-8 & § 76-3-204). Those convicted of a misdemeanor also face a six-month suspension of their driver’s license.

What’s more, the penalties for possessing cannabis-related paraphernalia are the same as actually possessing the substance (Utah Code §§ 58-37a-3-5 & §§ 76-3-203-301). Additionally, even if a person unknowingly is in possession of cannabis or cannabis paraphernalia (for example, when it is located in a person’s home or vehicle and said person does not know about it but others in the home or car do), then they may be charged as if they possessed the cannabis themselves under the theory of “constructive possession.” (2)

Beyond the harsh immediate consequences described above, there are other collateral consequences to having a misdemeanor on your record that can plague a person for years beyond their conviction date. The long-term ramifications are devastating for not only an individual but often for their family as well. Often they are excluded from obtaining certain professional licenses or obtaining certain jobs. A misdemeanor is a matter of public record and will show up on a background check. This may affect a person’s ability to rent or buy a home or even get accepted into a college. If a legal immigrant is charged with a misdemeanor, this could result in deportation.

Leftovers from the “War on Drugs”

Again, we at WholesomeCo do not condone breaking the law. That being said, we stand with other common-sense voices in our community when we point out the obvious. In today’s economic climate, where the cannabis industry nationwide supports close to half a million legitimate jobs (and hundreds of them right here in this state), putting under-1-ounce cannabis possession in the same category as prostitution, illegal gambling, or domestic violence just does not make sense.

So how did we get here in the first place?

To really answer that question, we have to go back to the very beginning of cannabis prohibition, circa the 1930s. By the middle of this decade, alcohol prohibition was just about to come to an end and the Federal Bureau of Narcotics was about to lose its Public Enemy Number One. Seeing the writing on the wall, then FBN commissioner, Harry J. Anslinger, created a campaign to go after cannabis.

The campaign portrayed cannabis, or “marijuana” as it became known during that time, as a dangerous drug used primarily by “ethnic minorities,” primarily African Americans and Latinos. Anslinger equated cannabis possession and use with violent acts and immorality and even went so far as to testify before Congress. There, he stated that the majority of the crime in the U.S. originated from cannabis-intoxicated people of color. Anslinger’s actions, and the actions of others like William Randolph Hearst, ultimately led to the passage of the Marihuana Tax Act of 1937. Thus began the era of cannabis prohibition in America. (3)

Prior to Anslinger’s campaign, cannabis was considered by the majority of the U.S. population as a harmless relaxation herb. It was known (and used) by many for its medicinal uses as well. In fact, prior to the early 1940s, cannabis was listed in the United States Pharmacopeia (as Extractum Cannabis or Extract of Hemp). The United States Pharmacopeia is a highly respected, private, non-profit organization that has conducted independent research on food, medicines, and supplements for over 200 years. (4)

Fast forward to the 1970s through 1990s, and the federal stranglehold on cannabis use gets tighter via the “War on Drugs.” In 1970, then-president Richard Nixon passed the Controlled Substances Act that positioned cannabis as a Schedule I drug, on par with, among other substances, heroin, LSD, and peyote. It should be noted that the criteria for including a substance in Schedule I requires that the substance has no currently accepted medical use and has a high potential for abuse and dependency.

During the 1980s and 1990s, hundreds of thousands of Americans were incarcerated as a result of the War on Drugs. The majority of these incarcerations were of people of color (primarily black and Latino men), who were largely jailed for minor drug possession.

In Utah, a 2018 ACLU report found that black people were 4.92 times more likely to be arrested for possession of cannabis than white people. (5) According to Pedro Padilla-Martinez with the ACLU of Utah’s Campaign for Smart Justice, the total estimated cost to Utah taxpayers of all of marijuana possession arrests as of 2010 equals more than 14 million dollars.(6)

Recent Legislation in the US and Utah: the MORE Act and Clean Slate

So now it is 2022 and a new era for cannabis reform has obviously begun. We can see this, of course, in Utah with the passage of the Utah Medical Cannabis Act, or UMCA, in 2018.

A new wave of legislation is also being introduced that will continue to loosen the grip of cannabis prohibition. The Marijuana Opportunity Reinvestment and Expungement (MORE) Act of 2021 would decriminalize and deschedule cannabis in the US and provide for expungement of cannabis offenses nationwide. It will also provide for the “reinvestment in certain persons adversely impacted by the War on Drugs.” The MORE Act was first introduced in 2020 and again in May 2021. Just recently, the MORE Act was passed by the U.S. House of Representatives. In addition to the MORE Act, there are several other pieces of cannabis legislation making their way through the halls of Congress that may affect cannabis prohibition, including the Cannabis Administration and Opportunity Act (Sen. Chuck Schumer, not yet introduced in Congress), the States Reform Act (Rep. Nancy Mace), and the SAFE Banking Act (Rep. Ed Perlmutter).

In the state of Utah, roughly one out of every four individuals have some type of criminal record. Again, many of these are minor, non-violent offenses, such as cannabis possession. And although the state has always had a legal avenue for record expungement, close to 90% of all Utahns who currently qualify have not completed the application process. This is mostly because to do so costs time, money, and a significant amount of legal expertise.

In response to this, the Utah legislature passed a new law in 2019 around expunging criminal records, referred to as the “Clean Slate Act.” Under the Act, if an individual has not been convicted of a crime within the last 5 to 7 years, “all or part of your criminal record” for Misdemeanor A, B, or C offenses are eligible to be expunged. Expungement means that the offense will no longer show up on background checks and you will not be required to reveal the offense if asked.

The Clean Slate Act, which went into effect just a few short weeks ago on February 20, 2022, sets up an automatic system where records are automatically expunged for those who apply. Clean Slate is estimated to affect close to half of a million people in the state. Prior to Clean Slate, individuals had to petition for expungement under Utah Code section 77-40. Some cases may still require a petition so be sure to contact your legal counsel or an organization such as CleanSlateUtah.org to find out if this applies to your case. (7) Additionally, there are actual expungement provisions in Utah’s medical cannabis laws under Utah Code section 77-40-103(5).

Cannabis remains an illegal Schedule 1 drug in Utah. The immediate ramifications – such as a hefty fine and jail time—are still a harsh reality for those who choose to possess and use without a medical cannabis card. But at least now, thanks to the expungement provisions under Utah’s cannabis laws (which sets up expungement provisions via petition) and Utah’s new Clean Slate legislation, many Utahns may have the opportunity to experience justice and enjoy freedom and opportunity in their lives again.

What you can do

We are excited and honored to be on the “cutting edge” of the cannabis industry here in the Beehive state. We believe that this industry truly is helping the state and local economy through jobs, consumer resources, and, of course, through helping so many card-carrying clients like yourself with their health needs.

You can be a part of this exciting time by “voting” with your dollars here at WholesomeCo. In doing so, you will also be helping two amazing organizations.

Come to our WholesomeCo store location in Bountiful, Utah to shop or order products online for pickup or delivery on April 20, 2022. On that day, WholesomeCo will be donating 4.2% of all sales to theweldonproject.org and its Mission Green initiative.

April 20th is historically the highest sales day of the year for legal medical cannabis operators across the nation and here in Utah. In light of this, we believe it is a great day to give back to an organization that supports those who are still impacted by cannabis prohibition and cannabis-related offenses.

The Weldon Project was inspired by the case of Weldon Angelos. In 2003, Angelos was an up-and-coming musician in Utah. Then, at age 23, he was sentenced to a mandatory term of 55 years in federal prison without the possibility of early release for a first-time, cannabis-related offense. Fortunately for Angelos, he was granted clemency and was released from federal prison, but only after serving 13 years.

His case would come to form a major part of the current movement around cannabis criminal justice reform. In December 2020, Angelos was granted a full pardon by former President Trump. Since being released, Angelos has made it his mission to secure the release of as many federal cannabis prisoners as he can. The Weldon Project, and its Mission Green Initiative, are dedicated to “funding social change and financial aid for those who are still serving prison time for cannabis-related offenses.”

Another important organization that we’ve partnered with and who will be at WholesomeCo on April 20th to help educate patients on their mission is Rasa, a citizen-focused public interest company dedicated to helping people clear their criminal records and connect with opportunities once their record has been expunged under Utah’s Clean Slate Act.

Although the Act will automatically clear thousands of current records (and thousands more into the future), the law as written does not account for any means to provide notification to individuals whose records have been expunged. That is why Rasa will work closely with other organizations, such as CleanSlateUtah.org, who are able to help people get the resources they need for petition-based expungement.

Rasa’s soon-to-be-released phone-based app will allow individuals to check on the status of their criminal records and expungement. The use of this app will be free for all Utahns below the poverty line. The Rasa app should be online sometime in April 2022.